Enabling people to succeed - Together

Founded in 1965 Coverdale is a pioneer in experiential (inductive) learning and coaching. We are experts in human and organizational development and have supported individuals, teams, organizations and communities in over 80 countries. At present we have offices in North America, Europe and Asia.

The focus of our work is on skill development in areas such as cooperation and teamwork, leadership, self-management skills, conflict management and negotiation. Our approach is evidence-based and continuously evolving by linking theories from appropriate disciplines, including psychology, neuroscience, adult development, communication, and organizational studies, with current coaching, training and development techniques.

We apply our methods to executive coaching, facilitation, consulting in organizational development projects as well as project management or intercultural cooperation.

Our coaches and consultants have front line management experience in a wide variety of industries: they know what it means to lead teams and organizations first hand rather than only academically.

The Coverdale organization is a network of co-owned companies. This enables us to direct all our efforts on delivering results for our clients.

We are guided by our mission and a deeply rooted set of guiding principles and values.

Enabling people to succeed - Together

This is why we exist. It is what we are about.
Our whole raison d'être is to help others be successful. It guides everything we do.

Today’s and tomorrow's markets are characterized by shareholders demanding best-in-class performance,
by continuous price pressure, rapid innovation, the pre-dominance of intellectual over financial capital
and by investors, regulators and other stakeholders demanding higher ethical standards.

We believe that a sustainable competitive advantage in this market environment can only be achieved
by a workforce that is highly engaged and very skillful in cooperating with each other
to reach organizational goals. This needs to be supported and driven by leadership
that is cooperative and participatory and is open minded to invest
in their own continuous skill development.

Coverdale has been from its beginnings a completely decentralized organization: There is no headquarter, no corporate holding, practically no hierarchy and no need for a command and control structure. Ownership and accountability is largely distributed to the team members that work with Coverdale.

The benefits for you:

The Coverdale Organization was established in 1965 by Ralph Coverdale.

A pioneer in experiential and inductive learning and a forerunner in organizational development, our passion for constant innovation, insight and excellence continues to grow.

Coverdale has developed from a UK training organization into a well-established international consultancy and has helped provide organizations and their people with the vision, creativity, commitment and skill necessary to bring about sustainable change, performance improvements and enhanced bottom line results.

Hundreds of thousands of people in over 80 countries worldwide have been touched by the methods Ralph Coverdale developed. 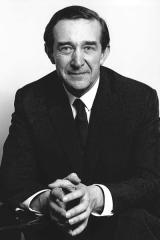 Ralph Coverdale was a former Jesuit novice, soldier, psychologist and management consultant. Ralph was one of the most striking and influential figures the UK has produced since the Second World War, yet to the public and even some of the business world, he was almost unknown.

After leaving the army in 1947 Ralph went to Oxford, where his supervisor was the renowned experimental psychologist, Bernard Babington-Smith. It was during his Oxford days that Ralph developed and refined his theories on how people think and work to get things done. He believed passionately that thinking and management were skills that could be developed, seriously challenging the orthodox view of the time regarding people having fixed skill sets, and locked IQs. Ralph and Bernard worked together for many years after the formation of the Coverdale Organization and developed Coverdale Learning, which is a highly developed form of learning through action - and has been subsequently described as action or inductive learning.

Ralph was a man of great insight and passionate beliefs, and was strongly driven by the view that co-operation to mutual benefit was infinitely more productive than conflict and competition. Ralph Coverdale died in 1975 aged 56. His peers recognized him as the man who 'invented' coaching and was a pathfinder in the field of inductive and experiential learning.

For over 50 years Coverdale has continuously updated and enhanced the approach based on latest empirical research.